skip to main | skip to sidebar

It's funny how some foods I've sort of been saying "so long" to over the past week - knowing that I'll be able to eat them again at some point once I adjust to the band, figure out its rules and boundaries and test things out. Other foods, however, it's a definite "goodbye" - food that it seems hardly anyone with a band can injest without consequences. Bagels fall in the latter category.

For breakfast today, I had what is likely the last bagel with cream cheese I'll ever eat in my life. Now, due to the significance of this for me, please indulge me for a few sentences...

My single most favorite breakfast is my usual - a poppy bagel toasted with veggie cream cheese at Roxy's deli, though the pumpernickel with feta dill cream cheese is a close second. So, I had "the 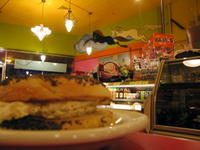 usual" today, lucky for me my favorite cook, Jeff, was on hand to make it just right, as he always does. He wears a funny shirt that says, "I see dead people" which I like. Creepy though is just how often he wears it, but I digress... It arrived piping hot (you who know me know how I love my food hot) and I ate it, not thinking too much about it - I worked on my grocery list, talked to Michelle, etc. I honestly might have cried if I'd thought about it. This is a sad state, when one cries over a bagel. Food issues you say? Maybe, but really, this would be one of the 5 things I'd take to a desert island with me.

That all said, I don't suppose it's really about the bagel now is it? It's more the fear and significance of the permanent nature of getting the band - I mean, there's no room for error (re: cheating) here - eat a bagel and throw up. Oh, wait, actually, eat a bagel, have it get stuck, be in significant discomfort (re: pain), produce an inordinate amount of saliva for about 30 minutes (mmm, yum...), then throw up. Now there's some fun!

The good news here is that eating bagels is no longer more important to me than being healthy. Don't get me wrong, I'll mourn bagels forever more...might even try a bite at some point and suffer the consequences...but I'm choosing myself as more important than a bagel (whoa - now there's a good sentence to take outta context). But you get what I mean, eh?
Posted by Jenn at 10:04 PM

Hi. This is so interesting. I just started my low carb/high protein pre-surgery diet and a bagel with cream cheese was what I wanted for my last breakfast too. Well, in all honesty, I ate two.

I have added your blog to my favorites and I am going to be perusing through it.